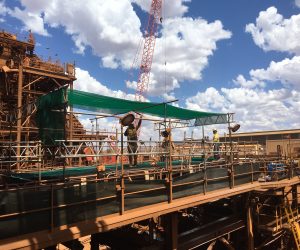 This month MINPROVISE have achieved another milestone with their first in-house supply of scaffolding equipment and services to a client in the Pilbara. This was achievable through the opening of the Total Solutions Provider’s new Workshop based out of Karratha for the convenience and efficiency of projects for Pilbara clients.

The scaffolding was required for Rio Tinto’s Conveyor Upgrades and Modifications and was undertaken by the MINPROVISE Karratha team, with Pilbara locals John Valikoula and Glyn Thomas at the helm.

The scope of works for the scaffolding project included; the mobilisation, provision, set-up and dismantle of tube and clip scaffolds to facilitate safe access to various work fronts for the conveyor SMP and E&I upgrades. Approximately 8 tonnes of scaffolding were mobilised for the project in early November, 2019.

BELOW
MINPROVISE staff demonstrating professional safety practices during project completion. The dismantled scaffolding were appropriately secured in transport frames and tied down for cranage removal and mobilisation.

BELOW
One of the many scaffolding structures. The MINPROVISE Karratha team successfully mobilised, installed and removed 8 tonnes of scaffolding at the RTIO Site.

The Scaffolding specialist team have completed previous works in the Oil & Gas, Lithium, Gold, Aluminium, Power & Energy, Construction and Mining industries for the likes of South32, Alcoa and Woodside.